Join The Fan Lab, a private Fandom research community for users in the US and UK where you will be asked to share your opinions on all things gaming and entertainment! Click here to see if you qualify

OpenWorld is a game mode in DemonsAreCrazy.

Open world is a special free-for-all zone where up to 20-40 players can join in. Inside, all demons will be able to kill each other, with unlimited re-spawn. Thus, this is a good area to go and test your demon skill out, or just have fun pvp-ing. There're often random event creep and Raid boss spawning in this area which you can hunt for special event rewards. Purgatory Plain, Purgatory Wall, and Purgatory Gate are open world area in DemonsAreCrazy. Here, event creeps will be spawn where players can hunt for items that can be used to trade for special unique items.

In openworld mode, all demons starts out at their current level. Killing any demons in this mode will not net player any exp or level. Killing event creeps however, will give you 10%EXP and Copper of their normal value. Raid Boss that is killed also give out exp and drop reward to all player in the whole area.

Raid Boss are special powerful entity that spawn in OpenWorld Area. They often required high level team of 10+ players to be able to take them on. Once defeated, all players currently in that stage will receive raid boss drop. 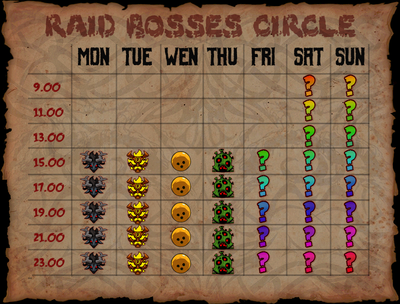